Hijab has always been a controversial subject and talking about taking it off is now becoming a TABOO when it really shouldn’t be.

As a muslim woman who’s been wearing Hijab for over 10 years, I’ve never given “taking it off” a second thought. I consider Hijab as my identity, my strength and my visual representation of my faith. But unfortunately, this is not the case with most of our sisters wearing it.

For the past couple of years, we all saw how many Hijabi influencers/role models taking their hijab off. One after another, like it is becoming a trend. I understand it may be disappointing and some of us might take it personal when we really shouldn’t thus, let me break it to you:

Taking Hijab off is a manifestation of a deeper issue as Melanie the CEO Haute Hijab said and it’s the deeper issue that needs to be addressed.

Ever felt like lamenting over the highs and lows of your faith? I bet yes. Ever found yourself trying hard to reconnect with Allah (swt) and still find it critical to stay connected to him (swt)? Probably yes too, right?

Just as the Prophet (Pbuh) explained to Abu Bakr (RA), these ups and downs are part of the path.

And had we always remained in the high, we wouldn’t be human. We’d be angels!

The key to succeeding on this path is that once you do reach your low, you keep going, knowing that it’s normal. – Yasmin Mogahed

Some of us struggle to make the 5 prayers a day at their appointed times and some of us find it the bare minimum! Each one of us is on a certain faith level and both need to be encouraged to do more in order to get closer and closer to Allah (swt) .

Everything considered, when we’re being concerned about a friend taking her Hijab off and wanna give her an advice it’s best to do it privately, kindly and with no judgments.

“It is considered an advice if it is done in private while humiliation if it is broadcasted.” 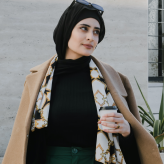 The power of Niching Down X Socialista

How to Build a Compelling Brand X ALA VISUALS